Autumn is here and there are many Shrieval duties underway as visiting Judges begin the delivery of Justice in courts across the County. This is marked by formal Annual Justice services where those concerned with the administration of Justice pledge an act of dedication to work with all our hearts,and all our minds, and our strength for the good of its people and the wellbeing of of its society.

Warwickshire’s open engagement and inclusiveness was clear by the participation of  5 high sheriffs from Derbyshire,West Midlands, Warwickshire, Yorkshire and Shropshire who witnessed an uplifting and insightful service with a sermon by the Dean The Right Reverend John Whitcome. 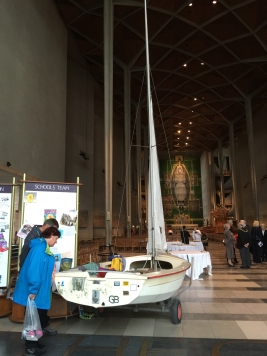 The Sutherland Tapestry hung majestically above a full congregation in the Cathedral of Peace and Reconciliation. On this day it was complimented by a small sailing dingy that a member of the congregation had provided for collections of materials and garments for refugees seeking safety from the current situation in Syria.

Birmingham Cathedral is the usual venue for the Annual Justice Service, however as this is the Cathedral’s 300th Anniversary and being refurbished we held  it this year in the Victoria Law Courts.  This is the third large event I have been engaged in this year as we recognise the beauty and history of the courts.   The service brought music to the courts with exceptional unaccompanied songs from the Cathedral Choir, conducted by Cannon Marcus Huxley, as they flanked the steps to the law library between the cream walls of the magistrates courts that are used daily for the administration of civil Justice.

The Order of service with the readings, hymns, psalms, and Act of Dedication by all those concerned with the Administration of Justice is available
here  :  Annual Justice Service 2015 order of service

Syria and the contemporary issue of migration was also the subject of the Sermon in the West Midlands Justice Service. It was delivered by The Right Honourable Caroline Spelman MP, Second Church Estates Commissioner. Alongside the range of readings on wisdom, knowledge and good council to support our Justices in making good and true judgements Ms Spelman’s sermon brought the complexity and difficulty of making decisions about migration on the world stage. As a Member of Parliament she may have to vote for action in Syria, which was not easy for her and her fellow parliamentarians. She related a number of experiences locally where members of her constituency had saught her help and advice on legal issues relating to their immigration to this country as refugees, many of which were resolved and led to people taking up valuable roles in Britain and contributing to society and the economy.  However she pointed out that in many cases resolutions took many years, much too long for all concerned. Consideration of these local and international issues of migration took the assembled people to a deep place of reflection and transcendence. Ms Spellman’s full sermon is available here: CAROLINE SPELMAN ANNUAL JUSTICE SERVICE

A series of pictures from the event are here.

The High Sheriff will be attending the Worcester Annual Justice Service this weekend.

Alongside this busy week there have been many associated arts, cultural and creative activities that see the Autumn off to  great cultural start.