On a snowy Thursday evening in Dudley Town Hall the High Sheriff enjoyed a warm evening with a good group of people to recognise the great contribution of 3 individuals that have given great service to Dudley.  The first to receive an award was Pat Martin who was made an Honorary Alderman.  She accepted the honour from Lord Mayor Steve Waltho and was witnessed by Chief Executive of the Council Ms Sarah Norman.

thanked Pat for all her good service. He then proceeded to carry out awarding of the Honorary Freeman of the Borough to David Caunt MBE and Councillor David Sparks OBE.  He noted that between the 3 honoured people they had given over 100 years service.

The Freemen thanked the Borough for their respective honours and shared good strong memories of their service and those they worked with and supported them. 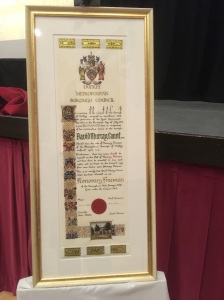 As the evening was progressing to the celebratory meal Pat came back to the Mic and presented the two new Freeman with a special reminder of their right to now shepherd their flocks down the high street. A neat ‘photoshoped’ surprise that brought smiles to everyone’s face.

David Sparkes thanked his family and his grandchildren who he also hoped would benefit from all the work local servants do in their communities. 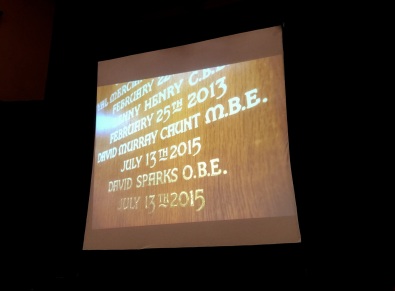 Quickly the new Freemen’s names appeared on the memorial board alongwith their most esteemed Dudley colleagues including Sir Lenny Henry.

Patricia Diana Martin served on North Bedfordshire Borough Council from 1974 to 1983. In 2000 she was elected to Dudley MBC where she served as a Councillor representing Amblecote until her retirement in 2015. Mrs Martin was Mayor of the Borough in 2009/10, having been Deputy Mayor in the previous year. She also served on the Cabinet/Executive as the Lead Member for Personnel, Legal and Property as well as holding numerous other key Committee memberships during her period of local government service.

David Murray Caunt MBE was elected to the County Borough of Dudley in 1970. He served continuously as a Councillor for the Sedgley ward until his retirement from Dudley MBC in May, 2015. During his lengthy public service, Mr Caunt held various key positions including Mayor of the Borough in 1983/84, Deputy Mayor the previous year and the Chairmanship of the Social Services, Finance, Education and Policy Committees. He also served as the Leader of the Council and represented the Borough on numerous local and national organisations. Mr Caunt received the MBE from the Queen for services to local government in 2010.

Councillor David Sparks OBE was elected to West Midlands County Council in 1977 to 1986 and to Dudley MBC from 1986 onwards. He has served as a ward Councillor in the Quarry Bank area continuously since 1986. Councillor Sparks has held various key positions including the Chairmanship of the Economic Development Committee, Leisure and Development Committee and the Economic Vitality Committee. He also served as Leader of the Council and has represented the Borough on numerous local and national organisations. In 2014, Councillor Sparks was elected as the Chair of the Local Government Association. He received the OBE in the Queen’s Birthday honours in 2003.